I taught cataloging in summer school the summer of 1967 and lived in the summer school faculty dorm.  Upstairs were housed six physical education teachers/coaches working on their master's degrees.  One of the guys, an assistant principal in Wilmington, also moon-lighted as a car salesman.  When he learned I didn't have a car, he proposed to sell me one.  But first I must get my learner's permit.  So, the summer of 1967, after my car arrived, I learned how to drive a car, going from Boone to Linville every afternoon about 4 pm.  The windows were wind-up and as we left Boone,  the windows were open.  As we approached Linville, the sun had dropped behind the mountains.  I had to force myself to take a hand off the wheel to roll up the window.  I also smoked in those days, but it took me forever to be able to smoke and drive.  I still marvel at that.


My new car was a 1967 v-8 289 Ford Mustang, lamentably with no air conditioning, but that wasn't a problem for me since I always lived in the mountains when I drove it.  After Needle Nicely moved to Florida for the winter, I left the mustang in NC because of the salt air.  I owned it for over 25 years and it was a beauty, though the floor board was rather suspect from winter salt when I finally sold it!
EDIT:  After all, it had been owned by a old maid librarian!

I did this pillow from a kit from Studio Two before I sold my car.  It gives you the idea that this is possible with any model car as a commemorative pillow.  Why not? 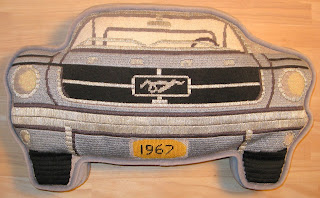 Posted by Needle Nicely at 2:33 PM