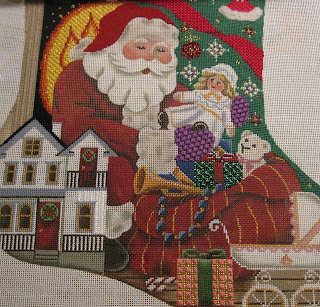 As usually happens while working on a large project, I developed that dreaded stitching enemy:  boredom.  To reawaken my interest, I did something I seldom do.  I moved around, and cherry-picked areas to stitch.  That's why Santa's mittens are so gorgeously purple.  I stitched them in the giant diagonal mosaic.  There were to be gold dots, but when I stitched them, they looked awful.  So I did some same color purple French knots out of the #5 DMC perle cotton I had used for the mittens.  They look nice and puffy like real mittens.  Then I did the pink and gold checkerboard package in the foreground in a combination of Scotch stitch and continental.  Next was that shiny green package stitched in high luster Balger.  I also started the white of the house in a row of continental and slanted gobelin.

Feeling excited again, I completed the last of the snowflakes on the tree.  Then I started the fire in the fireplace using silk lame braid in a combination of diagonal mosaic and continental stitch.  I also stitched Santa's cap, using petite very velvet in the nobuko stitch.  As usual when stitching velvet, I have to give myself time to rub the velvet fiber.

Posted by Needle Nicely at 2:38 PM